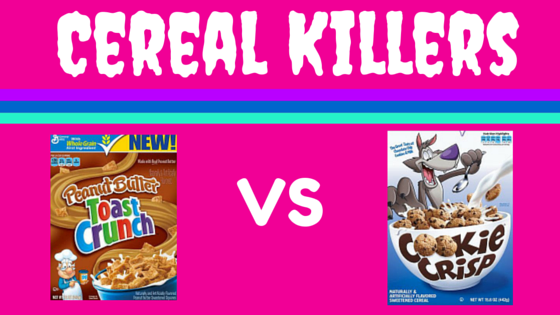 A couple of weekends ago the cactus pop crew headed down to USA Foods to stock up on some American goodies. We put two cereals to the test. Peanut Butter Toast Crunch, a new twist on the traditional Cinnamon Toast Crunch cereal, and the classic (?) Cookie Crisp. Warning: lots of sugar was consumed in the making of this post. 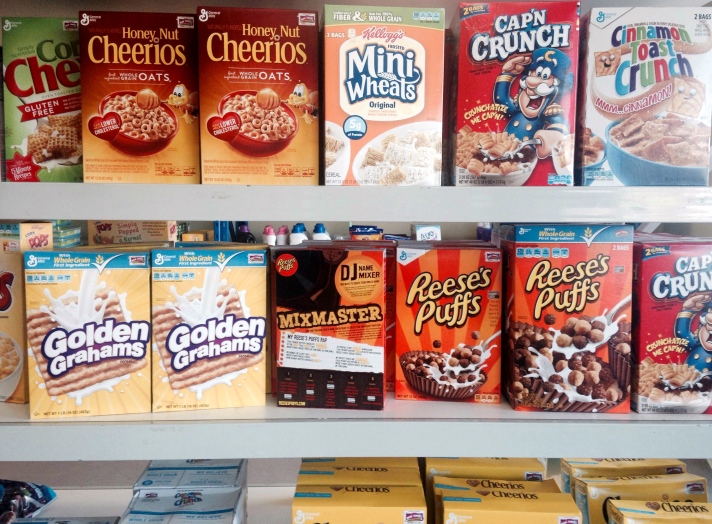 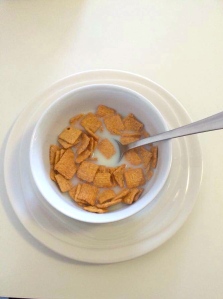 For those of us who love peanut butter, this cereal is a dream come true. Don’t be alarmed by the orange tinge (I thought I was eating mini Doritos at first) because the taste makes up for it. This is a cereal that you can’t rush into. If you try eating it before it has softened in the milk, it tastes gross. But give it a couple of minutes and the peanut butter flavour will really shine.  Sarah’s pro-tips: Do NOT eat it dry. Cerealicious Rating: 4/5  – SARAH

This one. It’s definitely not an attractive cereal. It’s orange and looks like it’s got a layer of salt on it. I thought it was pretty gross straight out of the packet, I will be honest. But, you know what? After it had the milk added and I let it go a bit soggy, I ended up enjoying it more than I would have thought possible. It’s actually not too bad. I wouldn’t say it’s my favourite and I don’t think it tastes that much like peanut butter (or, at all!), but it still wasn’t bad. It’s also pretty unhealthy (although, not as bad as I thought it would be) – bugger-all fibre! Which means, after a bowl, all I wanted to do was eat another bowl because I wasn’t full at all! Cerealicious Rating: 3/5 – SAM

Breakfast foods have to be tasty, sure, but texture is a vital part of any morning meal decision-making. I’m the kind of person who likes toast to be only slightly toasted – so basically warm bread. I like my cereal, however, to be very crunchy. You leave it in the bowl for more than two minutes and it’s baby food in milk (inedible). I don’t know why the name or the little cartoons on the box didn’t tip me off but Peanut Butter Toast Crunch is meant to be little pieces of toast (what is it with Americans and making cereal out of mini foods?). There’s just something about layers of flat cereal that works for me. PBTC might look gross but it’s crunchy and peanut-buttery and that’s all that matters. Melpo’s pro-tips: Eat it as soon as the milk hits the bowl for optimum crunchiness. Cerealicious Rating: 4/5 – MELPO

I’m going to be honest, I was more excited about the Cookie Crisp than the Peanut Butter Toast Crunch, but I was pleasantly surprised. I prefer my cereal slightly soggy so I think it’s best left a few minutes before consumption. It seems to bring out the peanut butter flavour which is very important. Visually it’s the least appealing of the two cereals as who could compare tiny cookies to flat orange flakes that appear to be covered in salt? But it’s all about the taste and fortunately it tastes better than it looks. Cerealicious Rating: 2/5 – EMMA 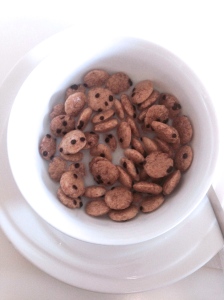 Cookies for breakfast? Sure, why not. Cookie Crisp is like eating a bowl of mini cookies. Except it really isn’t. The cookies are more “cereal-y” than “cookie-y”, and the chocolate chips are non-existent. I’m pretty sure they just put brown spots in the cereal to make it look like chocolate chips. This was confirmed when I tasted the leftover milk expecting chocolatey goodness and it tasted like crushed dreams and corn syrup. Sarah’s pro-tips: Let your cookies sit in milk for 5 minutes so they are soft on the outside by still crunchy in the middle. Don’t try this one with warm milk, the results are not pleasant. Cerealicious Rating: 2/5 – SARAH

I consider myself somewhat of a cereal expert. I LOVE cereal. I can eat it for breakfast, lunch and dinner. It’s a great snack and I have what I call my “summer” cereals (cereals I only like with cold milk that I eat during the warmer months) and I have my “winter” cereals (cereals best consumed with hot milk). And I like to think I am pretty healthy with my choices. I tend to go low sugar, high fibre. So I went into this little experiment with trepidation. Sampling a cereal that looks like little cookies seemed like a cavity waiting to happen. But, I was actually pleasantly surprised! It wasn’t as sickly sweet as I thought it would be and actually tasted reasonably wholesome! Although it actually has bugger-all fibre (yes, I couldn’t help checking the label again), the sugar was actually lower than the Sultana Bran I am currently eating! I also liked that you could let it get a bit soggy (I like my cereal a bit on the soggy side) but still get a bit of crunch in the middle of each “cookie”. It was kind of addictive really. Cerealicious Rating: 4/5 – SAM

I like cereal and I like cookies. Who doesn’t? If you answered ‘me’ to this question, get out of here. I went in with high expectations. The goofy cartoon wolf on the box looks so excited to dig into a bowl of mini cookies. I should have known never to trust a wolf. I was utterly underwhelmed by Cookie Crisp. It was cereal parading as cookies with little brown decorations . I finished a whole bowl and was left thinking, “Did I just eat a bowl of cereal or a bowl of air?” Melpo’s pro-tips: Pick another cereal. Cerealicious Rating: 1/5 – MELPO

For someone who has Cheerios every morning, chowing down on a bowl of Cookie Crisp was a different experience. At first bite it didn’t seem too sweet, but I made the mistake of pouring myself a bowl at 6am the next morning, and it was so much more intense! I usually drown my cereal in milk so that it gives it every opportunity to soften as I usually find that most cereals need to have a sogginess about them before they’re ripe to eat. So it definitely got better the more I ate it. I couldn’t eat it every day, but it’s probably a good cereal to have if you’re treating yo self. Cerealicious Rating: 4/5 – EMMA

This was a close call but the Ugly Step Sister of cereal has reigned supreme. Despite her sharp angles and orange glo’, Peanut Butter Toast Crunch has won us over.

What is your favourite cereal?