15 Movies to Get You in the Christmas Spirit 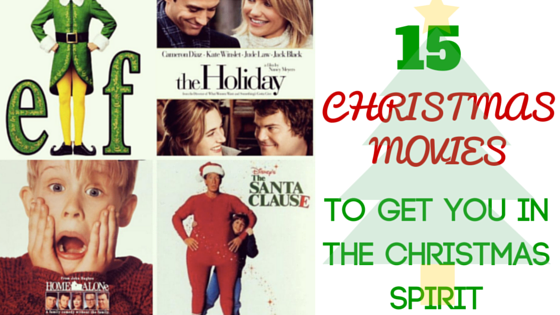 For those of you who are December 1st holiday purists, you’re now officially allowed to start watching Christmas movies! To help you out, we’ve compiled a list of 15 Movies to Get You in the Christmas Spirit! How many have you seen?

It’s not Christmas until you’ve watched Love Actually. Movies like this – with a large cast of characters who have their own storylines that cleverly turn out to be  linked – sometimes don’t work. But this one does work because it’s got a lot of heart and it’s really clever. Everyone has their favourite couples and storylines, there’s the lovelorn Prime Minister, the guy in love with his best friend’s wife, the grieving stepfather, the writer falling for someone who can’t speak the same language, the married couple whose marriage is on the rocks, and Rowan Atkinson. As a bonus it’s even got Hugh Grant dancing and an amazing soundtrack. – Emma

The Smiths are an upper-middle class family (a mum, a dad, four daughters, one son and a kooky Grandpa) who live in a beautiful Victorian home in St Louis, Missouri in 1903. This isn’t technically a Christmas movie since it shows the Smiths throughout all four seasons but who cares when the Christmas scenes include classy old fashioned snowmen (no carrot noses or twig arms here), a grand ball with dance cards and Judy Garland introducing Have Yourself a Merry Little Christmas to the world! The colourful costumes, catchy musical numbers and lovable family members (except Tootie – she is the devil) make it impossible not to be charmed. – Melpo

Look. I have to admit it. I am a twenty-something female and every time I watch this damn movie part of me sings inside that maybe Santa is actually real. I just can’t help it! This is sweet and funny and Tim Allen is just PERFECT in this role! I think it appeals to both little kids who will find the whole thing enchanting, and also to adults who will appreciate the humour and also need a little reminder about the magic of Christmas. It is the perfect Christmas Eve movie. – Sam

11-year-old Jessica (Juliet Sorcey) gets a free wish from a department store wishing well and uses it to make her single-parent family complete. In the same vein as the movie Mannequin, one of the store’s hottest (and for some reason Australian) mannequins (Olivia Newton-John) comes to life to fulfill Jessica’s wish for a mum for the holidays. Of course there’s a catch – she can only stay alive until Christmas Eve! Will they prevent her from turning back into plastic? Another pressing question – why does ONJ have a peroxide streak in her fringe? – Melpo

This movie has three things: magic, Manhattan and Mara Wilson. Susan (Wilson) doesn’t believe in Santa because her stuffy mother (Elizabeth Perkins) says he doesn’t exist. When the real Santa (sorry, Tim Allen but Richard Attenborough is it) gets a job at Coles Department Store, she starts to believe again. It’s heartwarming and sweet and Dylan McDermott looks damn good in a turtleneck. – Melpo

This one is probably a bit of a stretch – but come on, any movie with Christmassy scenes is automatically a Christmas movie in my opinion. Meg Ryan is Kathleen Kelly who owns The Shop Around the Corner (i.e. the shop I would love to own) and is in an online relationship (back in the days of dial up internet and email – no swiping right for Meg!) with none other than her fiercest rival, Fox Books owner Joe Fox (Tom Hanks). Of course, she doesn’t know that. There’s some Thanksgiving window display action, there’s some Christmas decorations and carols to be sung. There’s books and coffee and witty email conversations and chat rooms and it’s sweet as pie and I love it so much! – Sam

Everybody has heard of Home Alone. You know why? Because John Hughes has epic comedic chops, that’s why. Kevin McCallister (Macaulay Culkin) accidentally gets left home alone while the rest of his family jets off to Paris. He’s living the high life until a local crime duo “The Wet Bandits” (Joe Pesci and Daniel Stern) try to burgle his house. An amazing soundtrack, a delicious microwave mac and cheese dinner and a bucket-load of inappropriate activity for an unsupervised child make for a Merry Christmas, ya filthy animal. Also to be noted, the sequel is kind of better than the original – same storyline but set in New York. – Melpo

I feel like this movie is one of those ones that you either love or you hate. Me, I love it. Two women who are trying to move on from their douche bag exes decide to swap lives for the Christmas holidays. Iris (Kate Winslet) ends up in sunny LA and Amanda (Cameron Diaz) ends up in picture perfect Surrey, England. Of course it wouldn’t be a Christmas movie without a bit of romance and both women find themselves in the company of a couple of dreamboats in the form of Jude Law and Jack Black. Highlight for me is two young girls who steal the show! Such a sweet movie to get you in the spirit. – Emma

Buddy (Will Ferrell) is a human who was raised by elves. When he discovers that he isn’t an elf, Santa sends him to find his birth father in New York City. This really is the best movie that Will Ferrell has ever been in. Buddy’s naivety and love of all things Christmas is delightfully funny to watch. If you don’t like this movie all I can say is “you sit on a throne of lies!”. – Sarah

Ultimate guilty pleasure. The Thompson twins (Mary-Kate and Ashley Olsen) drive their single mother so crazy that they overhear her saying she needs a vacation! GASP. They decide to grant her her wish and run off to spend the holidays with Great Grandma Mimi but end up getting kidnapped by an old couple (Rhea Perlman and Jerry Van Dyke) who steal VCRs, chew gum and crush holiday spirit. A couple of half-eaten chicken legs, a wannabe cowboy, an incompetent cop and hijinks galore! Kid and kid-at-heart-friendly. – Melpo

How the Grinch Stole Christmas (2000)

This adaption of the classic children’s story is a great film for the whole family.  It’s extremely colourful with fantastic CGI, make-up and production elements. It is also a quintessential Jim Carey film, meaning there is plenty of humour in it (for both the adults and kids). – Sarah

Teen heartthrob Jonathan Taylor Thomas plays a college student who is trying to get home in time for Christmas. Jessica Biel also stars as JTT’s girlfriend. While, I wouldn’t classify this as a Christmas classic it’s OK for a chuckle. – Sarah

The Nightmare Before Christmas (1993)

When Jack Skellington, King of Halloween Town, discovers a door to Christmas Town, he decides to hijack Christmas. With fantastic songs, charming characters and a dark comedic story this is must-watch Christmas movie. – Sarah

When a suburban dad (Arnold Schwarzenegger) forgets to buy his son a Turbo Man action doll he must race around the city on Christmas Eve trying to find one. This movie is unbelievably stupid, but it is sure to make you laugh. A lot. – Sarah

Probably not a Christmas movie that immediately springs to mind, but a good one none the less. Sandra Bullock, a lonely ticket collector, is completely in love with Sandy Cohen from The OC even though she’s never really spoken to him. She sees him everyday while at work at the train station and when she happens to save his life one day she is mistaken for his fiancée. So while he is in a coma she is taken in by his family at Christmas where she meets his brother who seems to know that something isn’t quite right. If you’re after a sweet family movie then check this one out! – Emma