10 Things You Must Eat in Japan 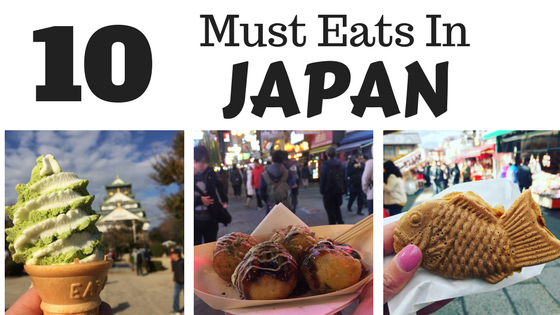 If there is one thing you should know before going to Japan it’s that the food is amazing. Make sure you bring your appetite before visiting the Land of the Rising Sun because you are not going to want to miss out on any of the food on offer. I personally found that the standard of food in Japan is much higher than in other places I have traveled. I could confidently walk into any restaurant and know that I was most likely going to have an excellent meal made with fresh ingredients and cooked to perfection.

Since I only spent 10 days in Japan I wasn’t able to eat all the things, but I sure did give it the old college try. There are probably some glaringly obvious things that I missed so leave a comment below and let me know what your Japan must eats are.

Kaiseki is a traditional Japanese multi-course meal of regional and seasonal specialties. This style of dining is typically served when staying at a ryokan (a traditional Japanese inn). Staying at a ryokan is an unmissable experience as it gives you a taste of Japanese culture and food. I stayed at the Hakone Sumimeisou ryokan in a Hakone; a town 1.5 hours from Tokyo that is known for its hot springs and views of Mt Fuji. We were served Kaiseki for our dinner and breakfast in a private dining room and were given traditional Japanese robes to wear to dinner and breakfast (I had to google instructions on how to put mine on). The staff spoke minimal English so we had no clue what we were eating but it was all part of the adventure.

While I can’t honestly say that I loved every dish that was served (some of it was a bit too bizarre for my tastes e.g. a whole grilled fish for breakfast), it was a fantastic introduction to traditional Japanese cuisine. 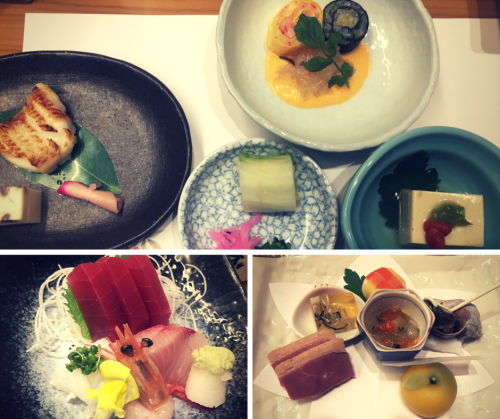 I have to admit that before going to Japan I didn’t have much time for ramen. I didn’t get the appeal or hype. Wasn’t it just noodles in broth? After trying the ramen at Montenashi Kuroki I have become a convert. The ramen I had at this popular Tokyo restaurant was so delicious; it had the perfect soup-to-noodle-to-topping ratio and was packed with flavour. We arrived 10 minutes before the restaurant opened for dinner and there were already five Japanese businessmen waiting ahead of us in the line, which just goes to show how beloved this place is with locals. Oh and I can’t forget to mention that the noodles are homemade. 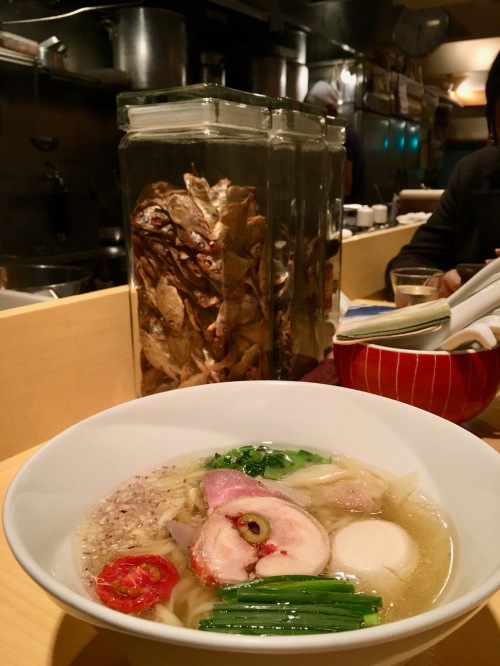 When I was planning my list of things to eat in Japan cheese tarts were not one of the first things that came to mind. Nevertheless, cheese tarts are all the rage in Japan with people queuing up around the block at the more popular chains selling these yummy treats. I got my cheese tart from the famous Hokkaido Baked Cheese Tart store and it was a thing of beauty. The cheese tart was not overly sweet and a bit tarter than a cheesecake with a creamy and slightly oozing centre and a buttery crust. You can now find Hokkaido Baked Cheese Tarts and Pablo, two of the big name Japanese cheese tart manufacturers, in various cities around the world, however, if you are in Japan you may as well get them from the original source.

My first memory of eating okonomiyaki is at a food court when I was 8 years old. It was probably the most exotic thing I had ever eaten at that point in my life (this was the 90s after all). It’s safe to say that the okonomiyaki in Japan was much better than the one that I had as a kid. Okonomiyaki is a savoury pancake that contains a variety of vegetables or meat. We went to Kiji in Osaka to try okonomiyaki as it’s one of the best okonomiyaki restaurants in the city. It’s located in the basement level of the Umeda Sky Building, making it a convenient location to grab a bite to eat before heading up to the Umeda Sky Building viewing deck to get a magnificent view of Osaka. 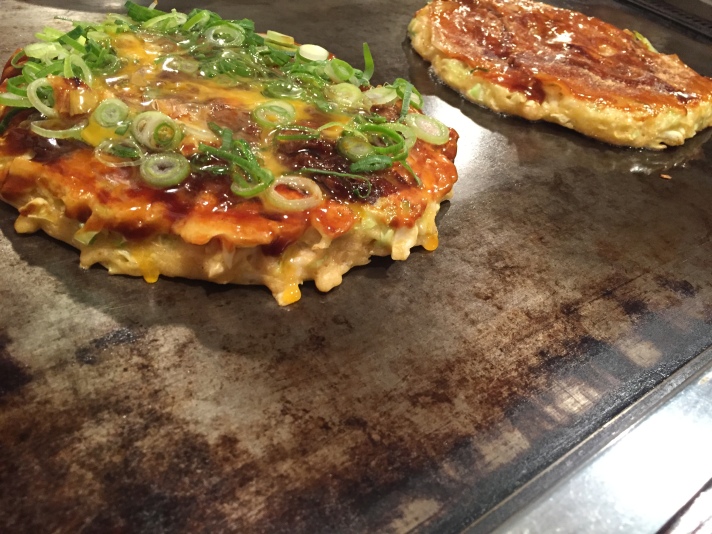 Back in 2012 when I had a slice of Junior’s cheesecake in NYC I thought that cheesecake couldn’t get much better than that. Lots has happened since 2012 and Japanese style cheesecake has since entered the scene. Japanese cheesecake is all about the jiggle. It’s part cheesecake and part souffle and it’s a must try when in Japan. The cream cheese flavour is mild, the cake isn’t overly sweet and the texture is airy and cotton soft. As with most things in Japan, the cheesecakes are made to look kawaii (cute) and most places will brand their mascot/logo on top of the cheesecake. I tried the cheesecake at Rikuro Ojisan and my cheesecake was branded with Uncle Rikuro’s face on it. Uncle Tetsu’s is another popular cheesecake chain in Japan. I guess the moral of this story is that uncles make the best cheesecakes. 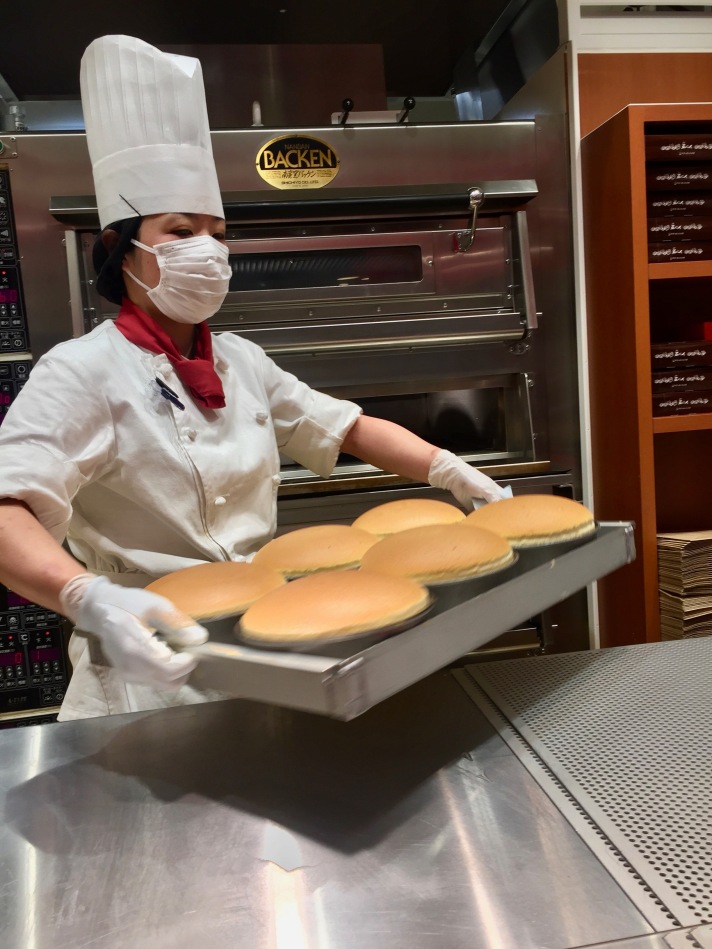 Just like you wouldn’t visit Italy without having pizza you can’t visit Japan and not eat sushi. Sushi in Japan is next-level. Forget about any of the sushi you have ever had before (i.e. California rolls). This is real sushi and it’s amazing. We queued for 45+ mins in the Osaka fish market just so we could try the sushi at Endo Sushi . I lost feeling in my hands and was jogging on the spot for 15 of those 45 mins to regain feeling in my extremities. But it was worth it. The sushi at Endo Sushi was, as promised, life changing. The sushi was also served with a miso soup that I could have guzzled by the gallon.

Kobe beef comes from a breed of wagyu cattle reared in Japan’s Hyogo Prefecture (Kobe being the capital city). I’m not a big meat eater so I didn’t realise beforehand that Kobe refers to a place and not the cut or kind of beef. The reason why this beef is so desirable is because it tastes freaking delicious. It all has to do with the amount of marbling of fat in the beef which makes the meat literally melt in your mouth. It’s highly unlikely that you would have had true Kobe beef outside of Japan (despite what restaurants may be telling you) so it’s worth the high price tag to try this while you are in Japan. I tried Kobe beef at Itoh Dining by NOBU in Kyoto. 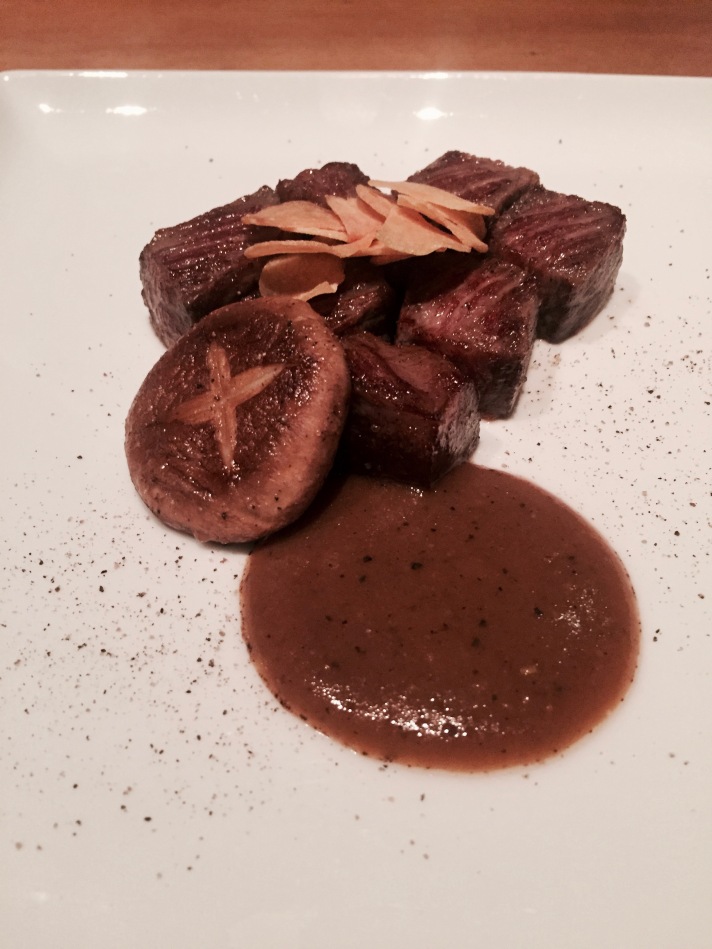 As you can see I’ve had some trouble narrowing down the list of Japan must eats to just 10 things. There is just too much good food in Japan. Street snacks is an entire category of its own. Even though eating while walking isn’t the done thing in Japan, there is no shortage of people selling snacks on the street. Osaka, in particular, was street food heaven. I wasn’t able to walk a block in any direction without being tempted by something.

Some of my favourite snacks pictured below were: matcha swirl ice cream at Osaka Castle; Onigiri (rice ball); Croquant-Chou (crispy cream puff) from Zaku Zaku Harajuku; Taiyaki (fish shaped pastry filled with red bean, custard or chocolate. I ate many of these); Takoyaki (octopus balls. Don’t be put off by the name. They are YUM);  Corn soup in a can from a vending machine (perfect thing to warm you up on a freezing cold day); Satsuma age (fried fishcakes); Dorayaki (honey pancakes sandwiched with red bean filling).

Katsu is Japan’s version of a schnitzel or cutlet. It is essentially a piece of meat coated in panko breadcrumbs and deep fried.Tonkatsu, or pork katsu, is the most popular of all the katsu. What makes this dish a bit special is the special tonkatsu sauce. If you go to a Tonkatsu restaurant they will most likely give you a mortar and pestle so you can grind sesame seeds to add to the sauce. Katsu can also be enjoyed served with a Japanese style curry sauce, in bento boxes, or even, as I had it one day, in a sandwich.

Confession time: this crepe is not a Harajuku crepe. While it was purchased in Tokyo, it was not from the Harajuku district. However, it was still delicious and jam-packed with bananas, chocolate, cream and ice-cream.

If you need further help planning your Japan trip, I found the following guides really valuable:

What to know what souvenirs and goodies you should bring back from Japan? Check out my list of 10 Weird and Wonderful Things to Buy in Japan.

This post contains affiliate links, which means we receive a small commission if you make a purchase using these links. It does not cost you any extra but it does help with the costs of running this site. And for that, we thank you.