10 Things to Expect While Watching a Telenovela 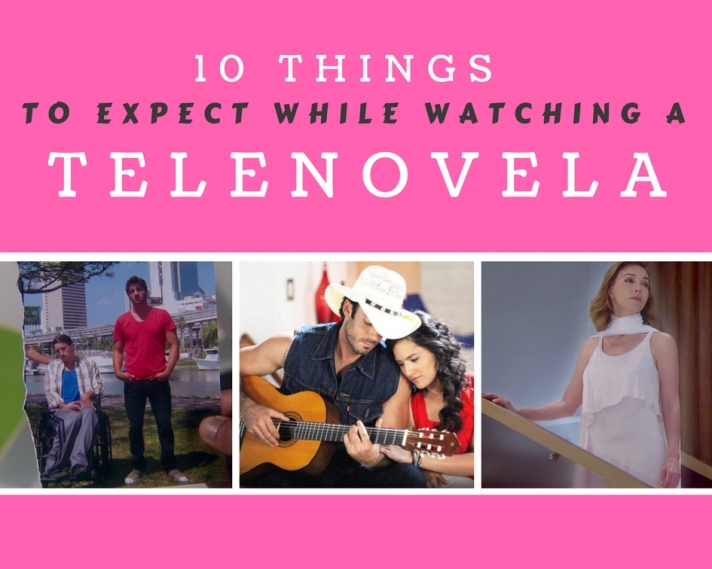 A couple of years ago I thought telenovelas were only something bored housewives and old ladies watched to pass the time. But now thanks to TV on demand and Netflix, I am a hardcore telenovela convert and devotee (and I’m not a housewife or “old”)! Some of you are probably thinking – Telenovelas? Aren’t they those foreign language soap operas with the comical melodrama, OTT bitch slaps and excessive shirtless men? Well, yes. Yes they are. But they’re also so much more than that. Like traditional English-speaking soap operas, telenovelas have their own set of traditional storylines and tropes that viewers look forward to. If you’re a novice, here are ten things to expect while watching a telenovela.

I still don’t get what a telenovela is. Explain it to me using small words.

The word telenovela comes from the combination of the words television and novela (Spanish word for novel). Spanish-language telenovelas are the most well-known (and well-liked by me) but they also exist in other parts of the world like the Philippines, Japan and South Korea. If you’re wondering what the difference between a telenovela and a traditional soap opera is, it’s the run time. A telenovela always has an end (they typically run for 120 episodes) whereas a soap opera can go for years until it’s cancelled (or not, like Days of Our Lives which has been on since 1965!). This means that a telenovela is usually more fast-paced – for example, you’re not expected to wait a week for a scandalous image to load on a computer (I’ll never get those seven days back, Passions!). Telenovelas will normally have one main theme like romance, comedy, mystery, history, supernatural or musical but if you’re lucky, you’ll find one that has a bit of everything. Fun fact: American TV shows Ugly Betty, Jane the Virgin, Chasing Life, Queen of the South and Devious Maids are all based on telenovelas.

10 Things to Expect While Watching a Telenovela

Twins are common in real life. Everyone at some point in their life knows someone who is a twin. In telenovelas, they are a staple. Some typical twin scenarios include: the secret twin, the long lost twin, the murdered twin, the good twin/evil twin and the always enjoyable identical strangers (doppelgangers). These scenarios go hand-in-hand with deep dark family secrets. You’ll often see families sitting down to breakfast (which usually consists of a large selection of fruit, bread and juice) and dinner (mostly salad but sometimes beef tinga – see below) but it’s rare to see anyone stop to eat lunch during the day. Nobody wants to watch a boring loved-up couple with no conflict – where’s the fun in that? Love triangles are timeless (although they tend to become love hexagons by the time the telenovela’s over). The stakes are always higher when a married couple’s involved and adultery is completely normal. The jealousy, the emotional turmoil – GIVE ME MORE!

Telenovela characters are very in touch with the spiritual world. Whether it’s dead family members trying to communicate with the living, souls switching bodies or enchanted talismans, you’re bound to witness some wackiness. Anticipate cameos by shamans, psychics and ghosts (usually a female in flowy white dress).

You can count on memorable fashion moments no matter what telenovela you’re watching. Wigs, extensions, goofy hats, skyscraper heels and gaudy jewellery are commonplace. Male telenovela actors are practically contracted to be shirtless during sex scenes which could be seen as sexist except the wardrobe of a typical telenovela female consists of tight fitting, low cut dresses…so it all evens out? The general rule is – skin, skin and more skin! Speaking of which, fake tan and make up are applied liberally to both females and males.

Everyone visits the hospital at least once. People suffer horrible fates like gunshot wounds, stabbings, overdoses, bashings, poisonings (either arsenic or rat poison), botched surgery and sexual assault. When – not if – characters become comatose/paralysed/blind, they always have a miraculous recovery at an important life event (wedding/birth/reunion). Those are the lucky ones – the unlucky will be sent to a filthy mental institution. Sidenote: Doctors, nurses and hospital staff are completely incompetent – they either provide false diagnoses, false hope or inadequate security/care. These people are often corrupt AF (they mustn’t get paid well)!

It’s fairly common for TV shows and movies to engage in product marketing. Often it will be integrated into the scene in a subtle way like a character using an iPad for homework or driving a Jeep to work. Telenovelas aren’t very good at subtle. In En Otra Piel they loved to eat Subway. La Casa de al Lado had commercial-length discussions about DishLATINO (a TV subscription service). The girls in Tierra de Reyes would shop exclusively at Macy’s and in one particularly hilarious episode they watched the Fifty Shades of Grey trailer.

Detectives and police departments are largely useless when it comes to investigating suspicious deaths and arresting the right people. The innocent are constantly jailed for crimes they didn’t commit. The guilty will rarely be incarcerated and even then it will be at the end of the telenovela (if they survive). Characters don’t get imprisoned as much as they get injured but it’s still a high strike rate. Arrests are normally a result of misunderstandings or characters being framed. Jail time will usually be linked to a side story involving murder, drugs or sex trafficking. Sometimes the trifecta! Also worth noting, the “bad guys” always live in the barrio (the “hood”) which can be distinguished by the graffiti on the walls, the loud Latin hip-hop and dodgy types hanging around on street corners.

A baby is a wonderful thing. It’s also a fantastic plot device. Happy married couples hardly ever become pregnant because, hello, boring! Then again happy married couples in telenovelas are virtually nonexistent (except in the last episode because everyone lives happily ever at that point). You’re more likely to see an unwed couple become pregnant by accident or an adulterous married woman become pregnant in a classic “Who’s your daddy” set-up (although one suitor probably can’t have kids – no DNA test required!). Hot tip: false pregnancies are handy to whip out when devious women need to hold onto their men.

Most telenovelas will have specific songs for specific couples. Whenever they’re on screen and they’re doing something romantic, their song will play. If the couple is known to be involved in goofy mischief, goofy mischievous music will play. Main couples often have power ballads that you’ll find yourself learning all the words to.