10 Reasons You Should Join the Good Ship Bughead

If you’ve been watching and falling in love with Riverdale, it may have already come to your attention that there’s a new relationship on the horizon. Betty and Jughead, ship name Bughead, got closer in the last episode and their chemistry is undeniable! If you can’t see it, we’ve got 10 reasons to help you understand. For those of you already aboard the S.S. Bughead, get comfortable and enjoy the ride.

10 Reasons You Should Join the Good Ship Bughead

1. She’s the Only Girl He Can Stand in the Comics

Despite being an asexual woman-hater in the comic books, Jughead is good friends with Betty. He sometimes even shows romantic interest in her.

The GIFs speak for themselves.

3. Their Nicknames for Each Other

Bets and Juggie – they’re pal nicknames and everyone knows the best relationships are built on friendships.

They’re enjoyable to watch as opposed to some other humourless pairings (I’m looking at you Garchie – good riddance, “Miss Grundy”).

Having the same taste in movies is a definite plus!

6. They’re Rebels with a Cause

Whether they’re investigating a story for the school paper or on a personal mission, they’ve both participated in breaking and entering and aggressively interrogating people to protect their friends, seek justice and expose the truth. Granted, Betty was significantly more aggressive with the maple syrup in the spa than Jughead digging into the boy scout’s ice cream sundae.

Bughead could totally take over The Riverdale Register (aka the Cooper family business) one day!

8. He Was Jealous of her “Date” with Trev

If his reaction in the newsroom wasn’t enough of a giveaway, check out his glare when Veronica says, “Betty, you’re positively radiating Nicholas Sparks. Tell me everything about this Trev.”

9. They Both Have Family Drama

Okay so almost all the Riverdale kids have family drama but hear me out. Jughead’s dad is the leader of the Southside Serpents and his mother and little sister are nowhere to be seen. Hal Cooper stole police evidence and is obsessed with an old family blood feud, Alice Cooper is a controlling wacko who is keeping her daughter medicated and Polly is in a group home due to an attempted suicide. Betty’s already confided in Jughead about her family drama so I’m guessing that she’ll soon find out he’s homeless and they’ll bond over their absent sisters and shady parents.

10. She Likes the Way He Looks in a Suit

Jughead is living out of a backpack so it’s highly unlikely that he has access to a black suit. Logistics aside, he looks good and Betty knows it.

For more Bughead love, check out our post that lists Every Bughead Scene from Season 1!

Can’t get enough of Bughead? Click on the images below to check out our Bughead and Riverdale themed designs on Redbubble. 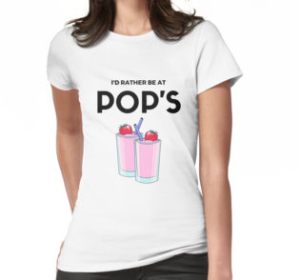