Janet borrowed this statement piece from the Vatican. 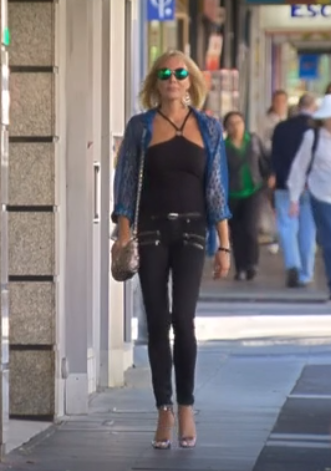 If I was visiting my father in a nursing home, I would not be squishing my boobs into this red strapless.

It was Gina versus Janet in the continuing – and to be honest, now boring- saga of ‘Did she have a Celebrity Apprentice viewing party?’ Glad Gina wrapped it up quickly with, “How about you all go fuck yourselves? I’m not doing this shit. Get fucked.”

Didn’t think Chyka was the type to have a huge self portrait but there you go. Another housewife, another self indulgent piece of ‘art’. Although to be fair, at least hers isn’t the focal point of her living room…

The Junior Wolf, Luke, Gamble’s stepson gave a beautiful, heartfelt speech at the wedding, and there was not a dry eye left at that table – or at my house where I was watching. Hearing him tell everyone that now that Gamble was in his life, there was “Food on the table, flowers in the house, vodka and pinot noir always on hand, and most importantly a house we can now call a home,” was just absolutely gorgeous. Then mouthing across the table that he has a mother now. *sob* What a darling.

I wouldn’t mind a piece of the toppling wedding cake. The food in this ep was pretty on point – I think I’ll have to go get myself a chicken burger from Eden Espresso. FACIAL EXPRESSIONS OF THE WEEK

Damn, Jackie! Back at it again with the awesome facials! Brian’s “happy ending” story didn’t go over very well with the ladies.

Sadly, there wasn’t much of Lydia in this episode. But her vom face during that same conversation and in the interviews afterward were highly entertaining. Kind of the same reaction I get whenever she tries to flirt with unsuspecting strangers.

Susie deserves the honour this week for ditching Marcello the chauvinistic, arrogant, self-absorbed douche (who apparently at 38 has no idea what cuff links are?)!