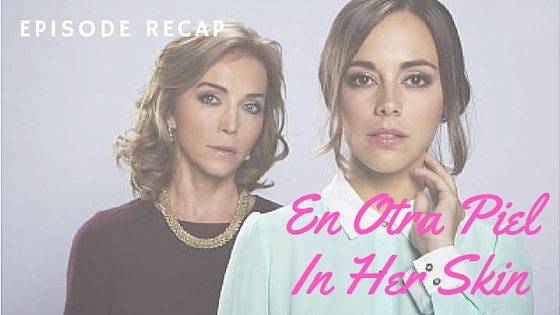 At long last everyone, En Otra Piel (In Her Skin) is back from it’s break! Time to see just where Elena went after her total meltdown at hearing Monica’s piano music playing loudly through the house! Let’s do this!

Lorena is covering her ears and shaking her head and looking like she’s losing the plot. As are all the guests who are hastily rushing towards the exit. Elena is completely melting down. Susana is trying to get people to stay. Elena is yelling at the wall that once lead to the secret room shrieking for “Adriana” to stop. She then stalks out into the foyer screaming and Monicana is standing there cool as a cucumber. Cut to Lorena who is drowning her guilty sorrows in a bottle of whiskey. Then she comes down the stairs, wailing about Monica forgiving her and having betrayed her and she’s completely drunk and about to pass out. Hahaha! I can’t help but laugh. What a great end to Elena’s wedding. And then the music stops.

Meanwhile, Maite is tending to Anselmo’s wounds – while also having a go at him for stealing her money. Then he says his wounds are all her fault. Aaaaand they’re back on the rocks. Anselmo chases Maite down the street wanting her to give him. She says she will consider it based on how he behaves. But really, there story, while I usually care, is a pointless side note to the real drama this episode.

Elena forces Lorena upstairs and Elena is absolutely livid. Lorena says she can’t handle the guilt anymore and then Elena sees the letter for the court summons. Ha! I forgot that happened last time! Remember, Jorge is suing Lorena for custody. Now Elena is beyond livid. This is amazing. But then she says they have to take out Emi to prove to Monica’s ghost whose in charge. Then she even admits to being the reason behind Emi’s paralysis. And basically blackmails Lorena – keep custody of Emi, or Emi will be paralysed from the neck down.

Outside, Emi and Monicana are chatting and Emi wants to know if there’s something going on between Monicana and Jorge! LOL! But so sweet. Cami comes out to apologies to Monicana for suspecting her – now she knows she wasn’t behind the music. Finally, Cami comes to her senses. Only about 100 episodes too late.

Then, Marta offers us this interesting tidbit of information. Turns out the music that was playing so loudly has been heard before. Years ago when Elena was younger, she had failed a test and Monica grounded her. Monica had a recital that night and Elena turned that particular musical number on to ruin the concert. Looks like Marta might be lining up at the clues! I would love for her to solve this whole mystery.

After Cami returns inside, Elena comes downstairs looking every bit the villain in a red suit. Cami asks Lorena why she made such a fuss. Lorena says she feels guilty about Elena and Gerardo marrying. Argh. I guess we knew she wasn’t going to admit anything. Elena then says she will be sending workers around to examine the house for the source of the music and Jorge reminds her that those decisions are now Cami’s to make. Although the paperwork is still being worked on by Gerardo’s attorney, surprise, surprise.

Elena and Gerardo head back to Ernesto’s old apartment. Elena is mulling over who could possibly be behind the whole wedding fiasco. Then Elena tears up the deed to the house. And picks a fight with Gerardo. She’s not going on the honeymoon after everything that happened. Gerardo is like, hey girl I’ve kept up my end of the bargain by marrying you. But Elena doesn’t think that’s good enough – she wants him to love her, not Monicana. She’s never going to let this go! He says he’s only with her because of the baby. Argh. She then threatens to get an abortion because he can’t give her the life she wants. Geez. This is getting a bit heavy!

At the bar, Eddie pulls Diego aside and wants to know what he was up to at the wedding. Eddie is dying for information about Elena, something useful. Come on Diego. Come on Eddie. For heaven’s sake there must be some evidence somewhere that’s useful!

Finally, the big ending. The significant revelation! At the guesthouse, Lorena comes over to speak to Jorge. She has the court summons with her. Looks like she’s here to beg him to reconsider. Lorena says she needs to stay with Emi for the sake of everyone’s safety. And then. OMG. Lorena and Jorge are throwing insults at each other, and here it is, one of the moment’s we’ve been waiting for! Lorena says Jorge might have got her pregnant! Elena could be his daughter! haha! GREAT ENDING!