10 Things I Demand to See in Fuller House

Even if you’ve never seen Full House, you probably still know that John Stamos (and John Stamos’ hair) was in it, it launched the careers of Mary-Kate and Ashley Olsen and the theme song had a series of lengthy ‘ahhhhs’. I mean it was on the air from 1987-1995 so you should at least know it existed. Since nostalgia is a thing these days, it’s getting a Netflix sequel series called Fuller House. Like, of course. Also, it’s coming real soon. February 26th to be exact. As a long-time fan, I have to say this – HAVE MERCY! Also, I’ve got demands.

*Update 06/03/16: We have now watched Fuller House (twice) and added in the demands that were met to the bottom of the post! Enjoy.

Okay, so here’s a quick ‘Who’s Who’ in Full House, in case you’ve never seen it or if your memory is a bit fuzzy after 21 years:

Okay, so I’m excited. But I’m also needy and demanding. Which is why I’ve compiled a list of very reasonable things that I require from Fuller House.

If the beloved stuffed friends of the eldest Tanner girls are not visible somewhere in the house, I will be most seriously displeased. Jodie Sweetin had a replica of Mr. Bear in her daughter’s nursery and still has the original!

2. Jesse and the Rippers

This is a given. They were the hippest band around. If they don’t reunite and perform at The Smash Club, I will riot in the streets.

Is anyone else hypnotised by this gif or is it just me? These two as co-hosts were hilar. I have to know that Wake Up is still airing in San Francisco.

Okay, so he was a bit annoying. But I could stand to hear one more lame wood joke for old time’s sake.

Let’s see some old faces! Like Stephanie’s peer-pressuring friend Gia. Or D.J.’s old flame Viper! Just because Mary-Kate and Ashley are “too busy” to come back, doesn’t mean Michelle’s friends couldn’t pop their heads in. Teddy, Denise, Derek and Aaron would all be acceptable.

6. Comet (or Another Family Dog)

Remember when Stephanie made him a meatloaf cake with cheese frosting? LOL. Good times. Realistically, Comet is dead (RIP fictional dream dog). But they need a new family pet.

I’m not saying it has to be Disney World or Hawaii again but preferably somewhere tropical.

How rude if this doesn’t happen. Oh, Mylanta! Well pin a rose on your nose. Hola, Tanneritos! Have mercy! Cut it out. So many catch phrases to cash in on.

Full House was known for its ‘lame’ heart-to-heart scenes set to instrumental music. TV these days isn’t lame enough. I think one scene an episode should do the trick.

Back in Season 3 of Full House, there was an episode called “Those Better Not Be the Days” which featured a daydream sequence of the family years in the future. The only thing they got right is that someone’s wearing animal print. Wrong Katsopolis though!

Number 2: Jesse and the Rippers

One episode in and Jesse reunites his band for a special performance of “Forever”. Look…it was sweet, and it got the goosebumps. But I would be lying if I said it wasn’t a little bit awkward. Maybe that’s just me.

There’s half a Wake Up, San Francisco reunion when Danny lets Fire Chief Mulrooney sing “Danny Boy” after he cut his performance on the show years ago. Wish we could actually see him and Becky in the studio!

Mr. Woodchuck appears in a few episodes – 1, 3 and 13. The highlight is definitely in episode 1 where Joey tries to entertain baby Tommy but he’s equal parts terrified and willing it to stop.

No sign of Gia, Viper or any of Michelle’s friends but there was a brief mention of Kathy Santoni in Episode 13 and Harry Takayama came back in Episode 9 to kiss Stephanie’s hand one more time! 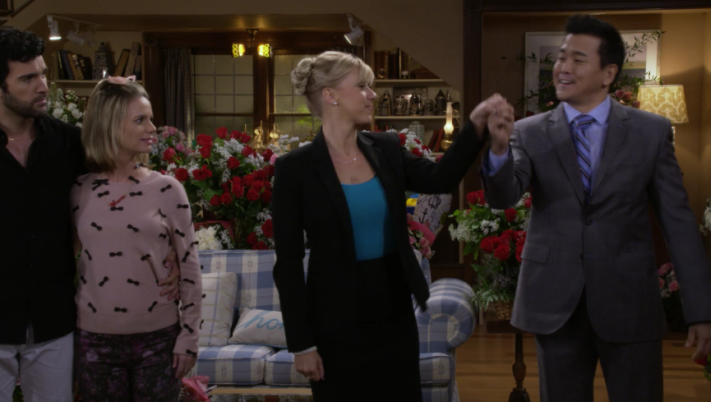 Well, Comet would be way too old, but his grand-doggy Comet Jr Jr takes a starring role!

Honestly…were any missed? I don’t think so. From “How rude!” to “Hola Tanneritos”, you won’t be disappointed. But my favourite? There’s even a “Cut it out!” from Joey!

There’s a family meeting at the end of the second episode, where D.J. needs to placate Jackson about sharing a room with his younger brother, Max. She reminisces about how sharing a room with Stephanie was the best growing up. Then Max initiates a group hug. And there’s instrumental music playing. Done.

That’s a total of 7 out of 10 demands met! Not bad. Here’s hoping Season 2 will give us Stephanie’s Mr. Bear and D.J.’s pillow person, The Beach Boys AND a vacation episode!

What else do you want to see in Season 2?